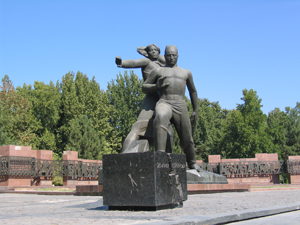 The pivot of the composition is a labradorite cube disrupted on 2 parts. There is a clock-face which shows the time of the earthquake (5:23 a.m.) on the one side of the cube, and the date (April 26, 1966) on the other. A zigzag split of the cube shear leads to the pedestal of the statuary. A bronze sculpture pictures a woman lapping a child. She backs out the hand as she’s trying to protect the child from the trouble. The figure of the man protects both of them from the imminent danger. The bronze base of shaped polygonal form is a symbol of destruction delivered by the earthquake. The ray paths of the pedestal lead to the stelas with people reconstructing the city on them – military men, builders, architectures and common civilians.

The earthquake of 1966 measured 9 on the Richter scale and the damage area covered 10 sq.km. The human losses were insignificant as the city was more or less of 1-storied earthen buildings. The builders of all the parts of the country arrived in Tashkent by construction trains with construction equipment and materials to build new houses for the people who lost their homes. Many districts of the city were named after the regions and countries from where the builders came. For example: Leningrad district, Moscow district, Perm district, Ukraine district etc. Many attics of the city houses still have the presentation inscriptions and ornaments. In expectation of new houses the city population and the builders has been living in tents and trailers for about several months. Many of children were send to summer camps of other Republics of the country. In honor of this fraternal help the avenue which connects the city center with a large residential area named Chilonzor (it has been building during the years after the earthquake) was named as the Avenue of the Friendship of Nations.

The park which joins the monument from the West and a round building on the hill (a museum of Olympic Glory) were also built in 1976. The museum collects the awards of Uzbekistan champions, photos and the souvenirs given to our president by foreign sportsmen.

Located in the center of the city world class hotel offers its guests comfortable rooms of different types and other facilities such as pool, gym and others.