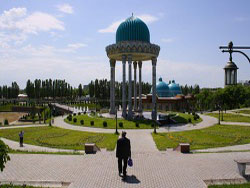 The Shohidlar Khotirasi memorial complex (the translation means: in honor of repressions victims) was built in 2000. Visually the complex can be divided on three parts. The central part is a rotunda with a memorable stone. This central part of the complex is the most festive. The other part of the complex is a park and a museum in memory of repressions victims. The third part is a water zone. The architectures formalized the river double in a very lucky way – they made it deeper which made it more graceful. The rotunda is decorated in a traditional Orient style. A turquoise curved dome is supported by 8 marble columns. In the inner side there is a sign wrote in three languages – Arabian, English and Uzbek: “The memories of those who died for their motherland will live forever”. In the central part of the rotunda there is a symbolic grave-stone oriented to Mecca.

The complex is dedicated to repressions victims of 1937-1953, during the period of Stalin regime. In the former USSR Uzbekistan gained the 3 rank on the repressions after Russia and Ukraine. The better part of Uzbek intellectual community among which there were poets, literary men, actors and engineers was killed during that time. They were accused of mythical espionage and connections with secret service. During the period of 1937 – 1953 about 14 000 of people were shooted down, about 118 000 of people were condemned to exile to the camps of the USSR. Among the victims there are such prominent figures as Abdulla Kodiriy, Fitrat, Chulpon and Khamza.

The museum in honor of repressions victims was opened on August 31, 2002, according to Uzbekistan Presidential Edict. In Uzbekistan August 31 is a day of memory of repressions victims and the people come here to worship them. The museum is situated under a light blue dome and has a lot of windows and inner lights. Indoors there is only one hall. Among the exhibit items there are generally documents and photos. If desired the hall can be done.

Located in the center of the city world class hotel offers its guests comfortable rooms of different types and other facilities such as pool, gym and others.